It was warm and breezy that afternoon in a forest nestled in the hills of New Jersey. The girls were bustling around, tiny boxes in hand, eager for the festivities to begin. It was an epic moment: this celebration of freedom was an appropriate end to a week-long journey chock-full of tears, laughter, outbursts of joy and anger.

Camp CADI is a camp crafted and created by Amy Barth in their honor: female survivors of sexual abuse. All week long these girls have been loved up, validated and completely surrounded in care and comfort by their peers, facilitators, volunteers and therapists, like myself. To this very day, Camp CADI is one of the most challenging and profound experiences I have ever known in my entire career as a music psychotherapist.

Current studies show that 1 in 5 girls and 1 in 20 boys is a victim of child sexual abuse. Most of the girls at this camp were not just sexually abused, but forced into prostitution at an early age. For a few of them, their dad or boyfriend was the pimp.

These girls were resilient and tough and fragile. Their moods would vacillate wildly. They opened their souls and poured out their hearts. They told their stories and we wept together.

Music therapy was the perfect container for all of it.

According to the American Music Therapy Association, “Music Therapy is an established health profession in which music is used within a therapeutic relationship to address physical, emotional, cognitive, and social needs of individuals.”

In other words, music is an emotional language. It is swift as lightning, bypassing our ego and built-in defense mechanisms, transporting us straight to the heart of an issue. The only way to resist the power of music is by turning the song off.

Conversely, if there is an emotion or experience that has been suppressed, the clinical application of music with a certified music therapist can assist an individual to uncover unconscious or hidden material – and process it.

Music therapy interventions include, but are not limited to: use of recorded songs, songwriting, song lyric analysis, musical and vocal improvisation, mindfulness practices, drumming and music with movement. I utilized a number of these methods with the girls at Camp CADI.

In one of the music therapy groups, one participant selected the song “Breakaway” by Kelly Clarkson and we analyzed the song lyrics as a group. Song lyric analysis can provide distance and objectivity. We examined a character in the song before we delved into our own personal story. This proved to be an excellent ice breaker. The girls shared their desire to escape and “breakaway” from their past, as well as the stigma that can be associated with sexual abuse.

After the song lyric analysis activity, the girls felt more comfortable because the music had provided a safe container to emote, share and express. One of the participants expressed anger at not being able to “breakaway” from their situation – in “reality” – and the group transitioned effortlessly into a musical improvisation, with a heavy focus on percussion.

The girls banged on the drums and rapped and yelled: “Gotta breakaway, gotta getaway!!” They beat the drums with sticks and beat at the brick walls with the musical foam tubes.

The song lyric analysis within a therapeutic context had created an opening – and the clinical music improvisation created a channel and vehicle of emotional expression. Afterwards, the girls all collapsed into laughter, tears streaming down their cheeks. Rage had given way to joy. It had been a good night.

On the last day of the workshop, we wrote a song to sum up our experience at Camp CADI. Some of the themes that emerged were freedom, taking flight, feeling safe among friends, forgiveness and love. We performed the song as a group after it was written – I played piano and the girls sang and played various instruments.

Professor Felicity Baker,  co-director of the Melbourne Conservatorium of Music’s National Music Therapy Research Unit states: “In therapeutic songwriting, a therapist purposefully engages the songwriters in a creative process whereby they craft a song that has personal meaning and simultaneously leads them through a journal of personal discovery. The songs that people create become a tangible record of their journey or a representation of their transformed state.”

We had written our opus. Now, it was time to take flight.

Finally, the moment had arrived. We all gathered on the dock, forming a circle. We chanted: “3, 2, 1…” and in that instant, we opened our tiny boxes: hundreds of black and gold butterfly wings fluttered into the big blue, setting our smiles ablaze.

I sang softly to myself, with tears brimming on the rims of my eyelids: “Gotta breakaway…break-a-way…” 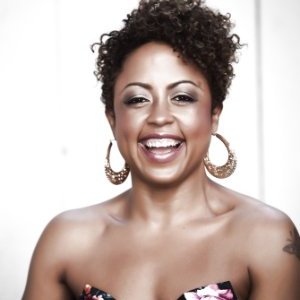 Stacie Aamon Yeldell, MA is a board certified music therapist and vocal psychotherapist as well as an international recording artist! You can connect with her on her website: www.stacieaamon.com