I am fifty-six and live in New Jersey. I was thirteen years old when I drew St. Paul’s Church for the cover of our parish bulletin.

Three years later I would daydream about hanging myself in the church steeple.

I was sexually abused for four years, first by the musical director of our church, and subsequently by the new Priest that I turned to for help. But this is not a victim story.

Instead eight years ago I decided to write, direct, and produce a new narrative for my life. First in 2010 I testified before the Senate Judiciary Committee to change the Statute of Limitations in my state. I finally was called upon at nearly five PM. to give my testimony. The Senators were half asleep in the gallery having listened to testimonies all day. A newspaper story described what happened next: “The Senate Judiciary Committee was taking testimony on a proposed bill that would do away with a two-year statute of limitations on lawsuits alleging child sex abuse. There were a few dozen spectators in the gallery — and one reporter. Then a 48-year-old man leaned into a microphone. And delivered a bombshell.” -The Star Ledger

The story was picked up by the media, and I realized that I needed to share my life as an example to men that not only is healing possible, but probable if we make the decision to take this arduous journey. The payoff in confronting unresolved emotional trauma is life changing. I believe that our lives are lessons for us to learn from, and that the greatest gift we can give to others is to inspire and give hope that love, happiness, and…freedom…is possible.

My first abuser is now a prominent Jesuit scholar in Rome. He is the world’s foremost authority on the liturgy, author of six books, and the ABC News Correspondent for Vatican Affairs. That year I wrote, directed, produced, and filmed my documentary “Of God and Gucci” without the knowledge or education to embark on such an undertaking.

I trusted my intuition and creative abilities to guide me in telling my story. Of God and Gucci was nominated for Best Documentary at the Golden Door Film Festival. It won “Best of the best”.

Raising awareness that 1in6 men have been sexually abused has become a life mission. 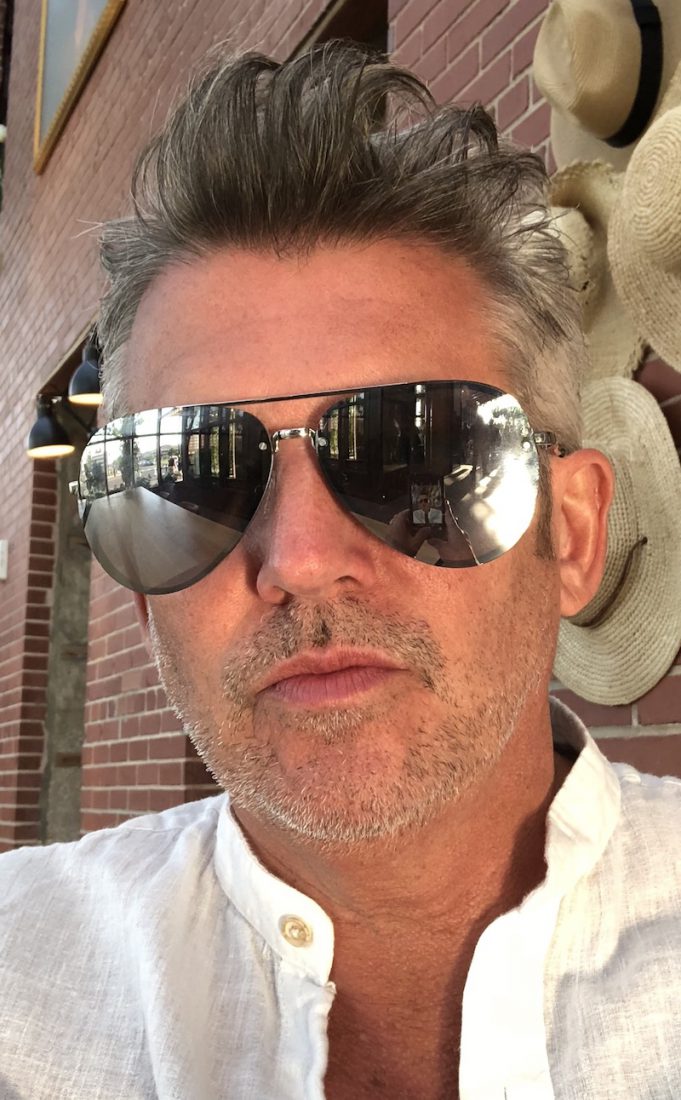 I was raised by devout Irish Catholic parents and the church was an integral part of our family life. Our Mom sang in the church choir and our Dad was the church usher. As a creative child, artistic and musically gifted, my family was pleased when I became involved with the church by joining the folk group, playing my guitar and singing at Sunday Mass.

Always a nervous child, everyone hoped that my involvement with the church would help me find my way. Instead, I would be taken down an un-Godly path encountering not one, but two men of the cloth who would repeatedly and violently abuse me over the next four years.

Shortly after the abuse began, a new Priest, Father Tom, came to St. Paul’s Parish. Fr. Tom befriended me and within a few months I trusted him enough to tell him that the musical director has been sexually abusing me Fr. Tom promised to make it stop. He did; but only for he himself to begin sexually abusing me for the next four years.

Never wavering in my Faith, I prayed for a way out. I was sent a real life angel, Diane whom I met at a local acting workshop. We both showed up at the acting class one night and out of the corner of my eye, I had seen the brass doors opening and in walks Diane.

“She looked like an Angel. She had these beautiful brown curls and these magnificent blue eyes. I knew that she would save me.”

At the time she was a married mother of two, but we developed a great friendship. Meeting Diane at the beginning of my abuse was clearly Divine Intervention. A few years went by and finally I was able to open up to Diane and tell her about the abuse. She was able to help me break away from the church and begin my healing process. A few years later, after Diane’s divorce, we fell in love and have been together ever since, happily married for thirty years.

At the age of eighteen, with one hundred dollars and nothing left other than my creativity , I started designing women’s clothes and became successful in the fashion industry, eventually having showrooms around the country and being featured in magazines and films.

I had created my own world in order to survive; however, I suffered decades from depression, severe anxiety, panic attacks, self-mutilation, an eating disorder and the fear that my abusers may had given me AIDS. Thankfully they had not.

I never went to therapy or counseling, but when I got to the point that I could no longer eat and was dangerously thin and malnourished, I went to see a Hypnotherapist. After two sessions, my eating disorder was under control.

It had a life changing effect. In fact, in 2001, I became a Clinical Hypnotherapist. Fashion Designer by day, Hypnotherapist by night.

I became aware of the connection between our emotional wellbeing and its effect on our physical body. Soon I designed workshops on how to change behaviors and live the life you deserve.

Through years of self discovery and self-care, I was able to confront my trauma head-on. I read countless books on self-help, self-care, and the power of believing. I used magical thinking ( and still do!) , learned various healing techniques and practices, and focused on healing my inner wounds.

Despite pursuing my dreams, with my angel Diane by my side, I knew that something was missing in my life. I wanted justice for what had been done to me.
In 2008, thirty-two years after my abuse, I confronted the Catholic Church and the two predators responsible. The church quickly settled the case but the no legal action was taken against the priests.

The process of healing our wounds from childhood sexual abuse is a unique process different for all of us. Each soul is on a different journey. It is not a linear process and the path is rocky, obstructed, and confusing at best. My healing journey was based upon the following phases of healing:

Creating my documentary was enormously therapeutic. I have also written a play “The Keeping Room” that I hope to produce, and I am working on other creative projects as well.

Last year I was asked to appear in another documentary “Groomed” that is currently in post production.

I still work in the fashion industry and recently designed a collection of shirts with messages of Empowerment.

I am also honored to be creatively involved with bristleconeproject.org and 1in6.org and have filmed a series of videos focused on male survivors sharing their stories. Having survived and thrived, I believe it is my responsibility to raise awareness and consciousness that healing can be contagious.

” Everyone that hears your story is understanding and empathetic. Many who are touched by hearing your life story have been sexually abused themselves, and for many, you will be the first person that they tell. You will be a conduit for healing and help other men know that healing is possible.”

I know that you will roll your eyes when I tell you this, but everything happens for a reason. First of all, I’m glad that you are still here and did not chose a permanent solution to a temporary problem. Your life is going to open up in ways that you never could have dreamed possible because of this horrific and confusing time in our life. I have a few things to say to you that have taken over forty-two years to process, but as long we are still here, that’s really all that matters.
Okay, here goes!

In 2018 you will be a RockStar! Yes- you are a good singer but that is not exactly what I mean! The universe will present an amazing offer to you. It will take decades of preparation and healing before you are ready to share your story to the world. But Keith, I have to be honest and totally upfront with you; this is not going to be easy by any stretch of the imagination. You will go through years of self -doubt, self-loathing and self-sabotage, before ultimately living in self -awareness.

Remember I often would say to you “High Risk, High Reward”?, well the risk it turns out- is in you sharing your story and the possibility that people will not believe you or support you on your journey. The guy who sexually abused you will become the world’s foremost authority on the liturgy, start his own church in Rome for visiting Americans, and become an ABC News Correspondent for Vatican Affairs! It will be discovered that Catholic Priests were sexually abusing boys all around the world! You will actually see him on television addressing the sexual abuse scandal!

I know, crazy! But guess what? Not only do people believe us, but the miracle that you spent years praying for actually comes true! Everyone that hears your story is understanding and empathetic. Many who are touched by hearing your life story have been sexually abused themselves, and for many, you will be the first person that they tell. You will be a conduit for healing and help other men know that healing is possible. Your life will become incredibly fulfilling and happy! Happy? Yes! Happy!

You will figure out how to use all of your creative abilities and interests to not only change your life, but to help inspire others.

It will all make sense in time.

You will try to help change the Statute of Limitations in New Jersey for child sexual abuse but that will be stalled in legislation for years, and frustrated, you will decide to go a different route by using your creative energy to raise awareness.

You are about to find the angel you have been praying for! Her name will be Diane and you will recognize each other from a time that you cannot explain.

It will be complicated however. Your angel is eleven years older than you and married. Oh, and she has two children! I know, this is crazy! You will meet at the acting class that you have been dreaming of taking! She will be the first person that you tell that you are being abused, and when you are eighteen years old, you both fall in love! You both get married when you are twenty-seven!
You become a fashion designer, film-maker, and public speaker! ( yes, I know that you can barely speak on a telephone at this point, but all that will change).

I know that this all sounds extraordinary, but it manifests from your determination to survive. It will be fueled by your faith and the love that we find along the way!

We will surpass insurmountable odds and create a life of Faith, Love and Divine Purpose.

So hold on, and keep praying. A miracle is about to happen.