My name is Cecibel Contreras, I am a child advocate, mentor and an author. I’m also the founder of It was ME Campaign and Incest Survivors United Voices of America, two non-profit organizations dedicated to spreading awareness about sexual abuse and to provide support and resources for both male and female survivors that have been affected by childhood sexual abuse.

Healing and recovery is a challenging process, but it is not an impossible one. You may suffer for a very long time from intrusive thoughts, flashbacks and other symptoms as a result of the sexual abuse but you must continue to press forward and walk the healing journey. I began my healing journey by sharing my story on a blogger and even though sharing my story brought a lot of pain, it also empowered me to know that I wasn’t alone and that I could heal and become the Rockstar that I am now.

I never said anything about the violations of my body to anyone because I really thought that all children were treated this way. I truly believed that all adults had the right to do anything they wanted with children. A year later after the molestation started I was awaken by my biological father about 6 AM and he raped me not only once but he raped me for five years.

For five years I  endured the most vicious tortures from my father. My father would burn my private parts and threaten me every day by telling me that he was going’s to kill my mom if I ever said anything to anyone about what was happening to me at home.

At age 14 I managed to escape and I came forward with the sexual abuse by my father to the police. My father was arrested and sentenced to 10 years of prison. My family disowned me and they didn’t want nothing to do with me so I was placed in foster homes. In those 7 Foster homes I was emotionally, physically and sexually abused until I decided to run away again. I lived in the streets for awhile until the police found me and I was placed in a group home.

Thereafter, at age 21 I became a victim of sex trafficking. I was groomed by a man that supposedly loved me and wanted to protect and marry me. We flew to Colombia and everything seemed like a fairly tale because I had finally found someone that loved me. After a couple of weeks in Colombia he told me that I was there to listen to him or that he would kill me. I was then raped, tortured and sold to different men for 6 months. There were times that I would lay in the cold concrete floor bleeding, hopeless and just wanting to die. I had no way of escaping this time because my leg was chained to a bed. My only salvation was for the authorities to rescue me or for someone to save me.  A bodyguard named Hector stood guard outside my door every day and I would plead, I would cry and I would ask him to help me. I would tell him about the sexual abuse that I endured by the hands of my father and the foster parents. He would sigh…but he never said a word.

He was in charge of feeding me and bathing me after a man had raped my body and every time someone raped me, I felt like they were murdering my soul. Men came in and out daily from this dungeon of a room that I spent 6 months of non stop tortures. I was also injected with heroin every day in the back of my legs. No one asked questions and no one cared about me. Some of them were lawyers, politicians and even a priest.

I had been selected to go to a “party” and I saw this as my way of escaping from the traffickers. One of the men at the party was nice to me and I chose to tell him that I was there unwillingly and to please help me. He told me that he would help me but instead of helping me he told the man that was in charge of me. The trafficker punched me in the face and dragged me by the hair and placed me inside the trunk that they would used to transport us women. That day I was severely beaten up and shocked with some kind of foreign electrical device. I was tortured and starved for days.

One day I was bleeding in the floor and slowly fading away. I had lost hope of ever coming out from this nightmare alive but suddenly Hector the bodyguard opens the door. He carries me out and he said in Spanish “Se fuerte niña que yo te voy a sacar de aquí “ be strong little girl that I’m going to take you out of here. I didn’t even have the strength to open my eyes. He placed me inside the car and covered me with some potatoes sacks and drove away from the mansion.

I woke up the next morning scared and not knowing where I was sleeping. I started screaming and he came in the door and said you are safe nobody is going to hurt you anymore.  Meanwhile the sex traffickers were looking everywhere for us. A couple of days went by and he heard a lot of cars in front of the hotel. He wakes me up and says you have to go. I’m in my underwear, I had no other clothes and I had to run for my life or I was going to be captured again by these men. Hector in his attempt to protect me lost his life. I ran as fast as I could and I tried to get help from some military officers. They took me to the jungle where they raped and beat me. They left me there for dead.

An older couple found me and I was taken to the US embassy. After two months in the hospital I was finally flown back to the USA.

My life continued to spiral out of control around  drugs and alcohol abuse.

One of the most difficult realities that I had to accept was the effects from my childhood would never completely go away. I was a very broken young woman.

I was so ashamed of what had happened to me and what everyone would think about me if I ever shared my story with anyone. I did things to harm myself because I could no longer hold on to the pain anymore that was held inside of me for so many years.

After a couple of suicide attempts and a terrible car accident that Ieft me in a coma for four months I realized that I couldn’t change the past or the abuse. But I could seek help and change my life.

I joined an alcohol and drug rehabilitation center, I got clean from my addictions. I went back to school and graduated with a Masters in Social Services with a clinical concentration.

I wanted to take all of my pain and turn it into healing, both for other survivors and for myself. So thats exactly what I did with my life. I emerged from a very broken woman into a strong, loving, empathetic, compassionate and powerful advocate. 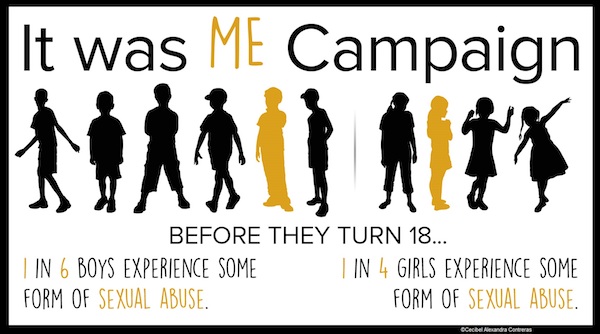 “I’m so proud of your resilience and your courage to survive the unimaginable horrors of child abuse. You are my heroine.“

I’m sorry for everything that you suffered during the most critical and important years of your life. Betrayal is among the most devastating losses a child can experience when they are emotionally, physically or sexually abused.

The betrayal of your family devastated you in many ways but I want you to know that it wasn’t your fault. The physical and sexual abuse left you confused and very hurt as a child. I’m sorry that I wasn’t able to rescue you sooner because I was scared just like you.

But when I finally rescued you I didn’t know that the abuse was going to continue in the foster homes and thereafter when you was sexually trafficked as a young woman.

I know that through your eyes things will never be the same again and that’s okay.

Do you remember when we pinky swore that we were going to be child abuse advocates if we ever made it out alive? Well, we did it!

I’m so proud of your resilience and your courage to survive the unimaginable horrors of child abuse. You are my heroine. There isn’t anyone in the whole world that I admire more than little Cecibel. Her steadfast desire to one day fight against sexual abuse and protect children was what made her survive the abuse.

I love you precious little girl.